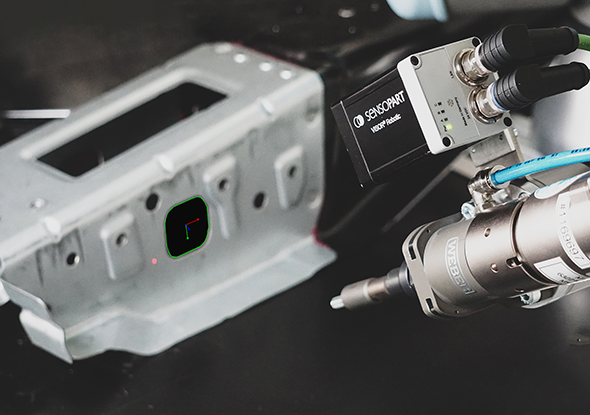 The installation of robotic applications becomes even easier and more flexible with SensoPart's latest software update for the VISOR® Robotic vision sensor. Thanks to a significantly expanded range of functions, all common 2D applications can be easily solved in the robot control system. The use of an additional 3D detector determines the position of objects in 3D coordinates. All new functions are independent of the robot system used: this makes VISOR® Robotic vision camera unique on the market.

More ease in setting up the application

Two years ago SensoPart launched 'VISOR® Robotic', the first dedicated vision camera for robotic applications. Now it's time for the next evolutionary phase. The current software version 2.2 for VISOR® Robotic offers a wide range of features, transferring the most important configuration steps from the robot control system to the sensor. New calibration methods give the user more freedom in setting up their application. Using smart, user-friendly functions, the position of the object detected by the camera can be synchronised with the robot's gripping point in just a few steps.

Manual eye calibration is used when the camera is mounted on a robot arm, for example when picking up objects from a tray or when tightening screws automatically. Advantage: in contrast to standard calibration methods, the field of view of the sensor during calibration does not have to be identical to the subsequent working range of the robot. This means that you can calibrate 'here' and work 'there'. The user can send the current position of the robot to the VISOR® Robotic via a trigger. This can be used for any position within the cell. This has extra advantages when spatial constraints do not allow the insertion of a calibration plate.

The second new calibration method, "Base eye", is suitable for applications where the camera is mounted on a stationary element, for example for the precise positioning of components in the gripper. Here, each element collected by the gripper from the tray is briefly held in front of the sensor and its exact position is determined; the gripper position can then be corrected at the next work step if necessary, for example when laying down the component.

With these two new calibration methods, it is no longer necessary to manually point the gripper arm at real points or make it grip components. To map the complete coordinate system in relation to the centre of the robot's tool, it is sufficient to take at least ten images at different positions of a calibration plate - placed in the robot's field of view or mounted on the robot arm.

The 'result offset' function makes it easy to detect parts that are difficult to detect. You shift the robot's working point, as it were, and pass on the calculated shift in coordinators. In this way, for example, it is possible to teach the sensor the contour of a cup when the robot's gripping point is at the handle.


From 2D to 3D: identifying height and tilt

Thanks to the feature update, all common 2D robot applications can be easily performed with the VISOR® Robotic, for example during material feeding or part machining. And there's more: with the new '3D contour detector', SensoPart transforms a 2D camera into a 3D version and provides additional 3D information to the robot sensor. This allows it, for example, to identify height differences or locate tilted components. Together with the 'result offset' function, it is also possible to learn gripping points that are rotated in relation to the object. In addition, the 3D detector also helps to accurately link a mobile robot to a workstation.

Resolve the task in the sensor

In this case, different image positions or gripping points are directly transmitted in robot coordinates by the VISOR® Robotic, so no further variables or calculations are needed in the robot control system. The simple standard command 'move to point' is enough to control the robot. Because the task is solved directly in the vision sensor, all settings are independent of the robot system used and easily transferable. This is very convenient when another camera or gripper is needed. The application is ready for use again after a few minutes, without a new teach-in procedure or the intervention of robot programmers. 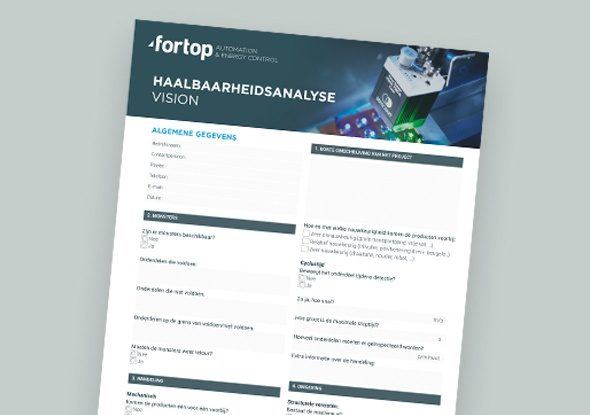 Is Vision a solution for you? To answer this question fortop has prepared a feasibility analysis. After answering a number of questions about your application, you will receive advice on the wishes and possibilities of Vision within your application.

Would you like to know more about machine safety, switches & sensors, signaling technology or connection technology? Fill in the form and we will contact you!