Why we need to reduce reactive power

In addition to useful, usable power, every electrical installation also has a power that is not effectively converted into heat, movement or light. We call this ineffective power or reactive power. Reactive power provides an extra load on cables, pipes and transformers. The network operator must transport this reactive power. At the same time, we get less useful energy from our contracted capacity.

What is reactive power?

In electrical installations, only a part of the power is used efficiently. This capacity is also called the actual capacity. It is converted by machines and equipment into movement, light, cooling or heat. Part of the power is always lost due to, for example, magnetism in motors and transformers and capacitors in electronic equipment. This is called reactive power or ineffective power. This power is fed back and forth 50 times per second in a 50 Hz network and not used effectively.

The real power (the beer) and the reactive power (the foam) added together, we call the apparent power

The real power and the reactive power added together, we call the apparent power. The entire network (the main distributor, transformers and main connection) must be able to distribute this apparent power. We can best compare this with a beer glass. The useful capacity (the beer) is used effectively. The non-useful capacity (the foam) ensures an increase in the capacity to be transported. The electrical installation (the beer glass) must be able to distribute useful and non-useful power. If the reactive power increases, the installation can become overloaded (the beer glass overflows).

We call the ratio between the actual power and the apparent power the power factor. This is the factor that indicates how useful we use power. If the power factor is "1", 100% of the power is used effectively. In practice, this is often between 0.6 and 0.9. The use of a capacitor bank or an active filter can increase the power factor and even optimize it to "1".

What types of reactive power are there?

The extent to which the energy is used for inductive and capacitive reactive power is indicated by cos-phi. Internationally this is called the displacement power factor (dPF). This is the ratio between the actual and apparent power of the fundamental component (50Hz component).

More and more non-linear loads are being applied in modern installations. Examples of this are, for example, rectifiers (laptop power supplies, servers) and inverters in modern UPS and frequency inverters. A characteristic of a non-linear load is that the used current is no longer sinusoidal. We also call the distortion of the current that results from this harmonic distortion.

A combination of types of reactive power

The Power Factor (PF) is the ratio between the actual and apparent power under all circumstances.

The general trend is that through the use of electronics and electronic drives:

We need to add the actual power (kW) and reactive power (kVar) together to arrive at the total power (kVA) that must be able to run through the installation. In comparison with the beer glass model, this means that we add the beer and foam together. To prevent flooding of the beer glass, a larger beer glass must be invested. In practice, a higher connection capacity at the network operator, more transformer capacity and a heavier installation will be required.

A higher energy bill due to extra losses

More reactive power also means more power through the installation. More current through the installation means higher losses due to the impedance (resistance) of the installation. We also call this the watt losses. This in turn ensures that more kWs are included (P = I2 * R). These losses, converted into a comparison with beer glass, mean that - no matter how strange it may sound - there is more beer in the glass that is not used effectively, but is absorbed by heat in, for example, cables and transformers.

Derating of transformers and generators

Harmonic reactive power ensures a smaller available capacity of transformers and generators. Due to the higher frequencies of the harmonics, additional copper and eddy current losses and extra losses are generated by inductive and capacitive couplings. Back to the comparison with the beer glass: due to harmonic currents, the beer glass cannot be completely filled.

Various publications - including the application guides of the IEE519 - publish derating curves. Based on these publications and our own measurement experiences, we use the following rough guideline for derating transformers and generators.

With a Cos-phi bank / capacitor bank

For example, if the load absorbs 50kVar of inductive reactive power, and we then put a capacitor bank with a capacity of 50kVar, the complete induction is canceled and the cos-phi becomes 1 through the transformer.

All the inductive reactive power is supplied by the capacitor bank. This relieves the main distributor, transformer and customer connection, creating extra power space.

A capacitor bank cannot be used:

With a Static VAR generator (SVG)

A static VAR generator (SVG) is a fast electronic and stepless reactive current compensation without capacitors. The SVG measures the inductive current [1] and injects a current that is phase-shifted with the voltage [2] such that the current for the filter [3] is neatly in phase with the voltage.

SVG advantages over a capacitor bank:

Typical areas of application of an SVG are:

With an Active Harmonic Filter (AHF)

An active harmonic filter (AHF) filters harmonic currents with an operating principle that is based on the principle of noise cancelling. The filter measures the current contamination [1] and injects a counter-current [2] that is of such a shape that the current for the filter [3] becomes nicely sinusoidal again. This compensates for all the harmonic reactive power. The harmonic filter is also capable of compensating both inductive and capacitive reactive power, with which such a filter can be used universally and is not overloaded.

Working principle of an active filter

All the harmonic reactive power is supplied by the active filter. This relieves the main distributor, transformer and customer connection, creating extra power space.

Advantages of an active harmonic filter:

The total reactive power flows through the entire installation without compensation. The sub-distributors, main distributor, main protection and the transformer are charged with reactive power.

The disadvantage of central compensation:

Continuous measurement and monitoring is necessary to determine the correct compensation system and to monitor it.

The compensation to be applied depends on the type of power that occurs in the installation.

Deliberately come to the right solution

Simply installing capacitor banks or active filters seems easy but is not cost-effective and can even be dangerous. Placing capacitor banks in installations with too many harmonics can lead to resonances due to the interaction of the harmonic currents and the capacitors in the reactive current compensation. In addition, it can lead to overloading of the capacitor bank with all its consequences. Placing an active filter if it is actually not necessary or if the intended effect is not forthcoming, is a waste of money.

That is why it is important to first perform a measurement - preferably for a longer period of time - with which the correct compensation technique and capacity can be determined. We always go through a ten-step plan to place a compensation system at fortop.

Power management is a continuous improvement process of measuring, monitoring and improving with the aim of saving energy, preventing failure and optimally utilizing the installation. Fortop has a team of technical specialists who can guide you through all these steps of power management. From the choice of the right meters at every level to the commissioning and maintenance of software and active compensation systems. We help you prepare and implement the ten-step plan.

Get in touch with our experts 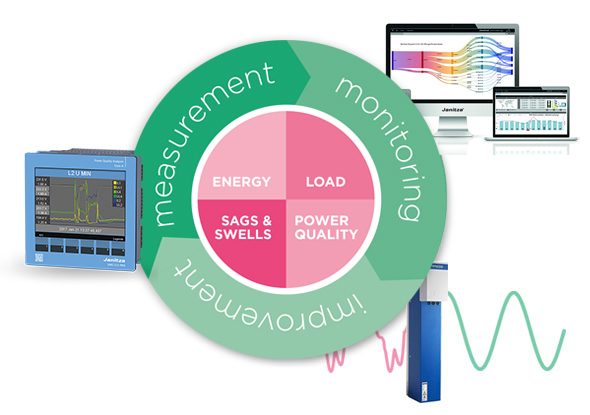